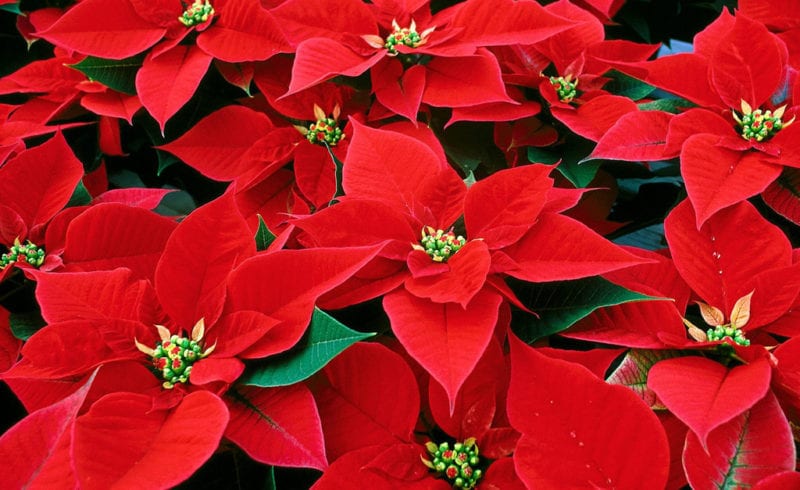 With over 2 million sold each year, making it the largest potted flower crop grown in the US. No other plant quite symbolizes Christmas like the poinsettia. With more than 100 varieties of colours in reds, yellows, whites, pinks, streaked, solid, marbled or multicolored it makes it hard to choose just one for our homes or businesses to add to our Christmas décor.

Named the Christmas Eve Flower or Flor Do Noche Buena, the poinsettia is a shrub indigenous to Mexico and Central America where it will grow up to ten feet tall. It belongs to the group of plants called spurges and was used by the Ancient Aztecs to produce a reddish-purple dye used for clothes or cosmetics and the sap it produces was made into medicine and used to treat fevers. The flowers, which are not flowers but leaves are called bracts, they change colour by gaining anthocyanin pigment as the nights get longer after the autumnal equinox. The flowers are actually the yellow bead like bits in the centre of the bracts called cyathia. When choosing your poinsettia choose one that looks strong and healthy, it shouldn’t be on display with the plastic/paper cover pulled up over the foliage as this will make the leaves mold and die and one that the yellow flower hasn’t opened yet, the plant will last longer than one that has already bloomed.

In the 1828 the plant was named by historian William H Prescott after the first US. Minister to Mexico an avid botanist, Joel Roberts Poinsett. In 1825 Joel sent clippings from Mexico to his home in South Carolina. He began growing the poinsettia in his greenhouses and later would send plants to his friend and different botanical gardens. Eventually it was cultivated and sold as cut flowers and later on it started to be promoted as an indoor ornamental potted plant for Christmas.

Caring for your poinsettia

Once you have chosen the perfect poinsettia for your home, be sure it isn’t exposed to cold temperatures for more than a few minutes. When carrying from the store to your care be sure the leaves are covered from the cold.

Once home place where there is natural light, where the sun doesn’t shine directly on the plant, keep it away from hot and cold draughts, don’t over water as it only needs a little water once the top of the soil feels dry (over watering will cause it to mold and die)

Most dispose of their poinsettia once the holidays are over, you can keep it during the year and it can bloom again next Christmas. Here is are some instructions to help you care for your poinsettia all year long.

APRIL to MAY – the colour will fad, keep near a sunny window and when new growth appears you can fertilize with a 20-20-20 mix, cut back the stems to about 20cm

JUNE to AUGUST – repot if needed, fertilize again with a 20-20-20 mix, continue to water when soil feels dry and once temperatures are warmer at night (above 10 degrees) it can be moved outside and place in a mostly shaded spot

MID SEPTEMBER – take inside, cut it back leaving 3 or 4 leaves per shoot, place in a sunny space and water as needed and fertilize again with a 20-20-20mix

DECEMBER – after 10 weeks of dark for 14 hours it can be brought out and put back in a sunny space, stop fertilizing at this point, keep watering as needed and if all went well it should be back in bloom and ready to begin the process all over again. 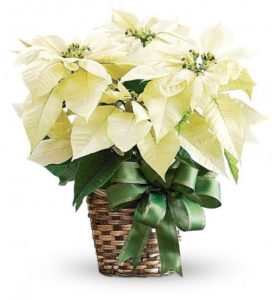